Etched into a Cliff with Jaw-Dropping Views and Design Cues from River Curves, a Textural Landscape and Luxury Yachts 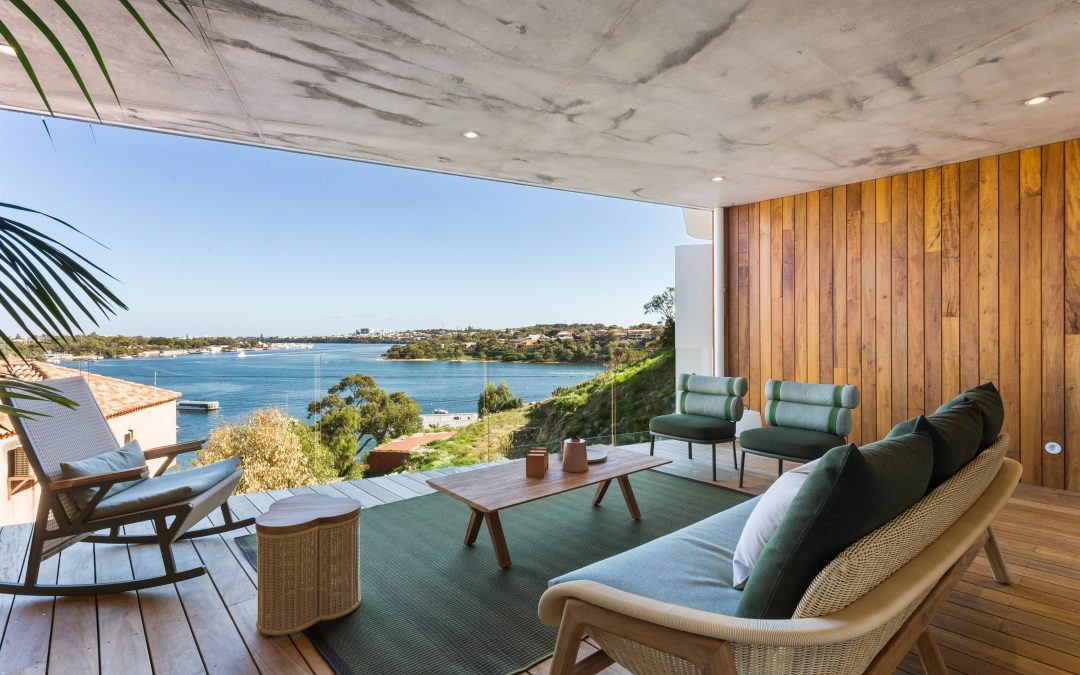 Overlooking the Swan River, Infinity Views is nestled into the cliffside above Perth’s sought-after Blackwall Reach. The structure and composition of this residence is extremely efficient by necessity. Conceived as a mechanism to communicate the expertise of the builder, it backs onto a sheer cut in the limestone cliff and splits across three tiered levels to maximise vertical space. This ship on land curves throughout, with almost no standard right-angle geometry to be found. 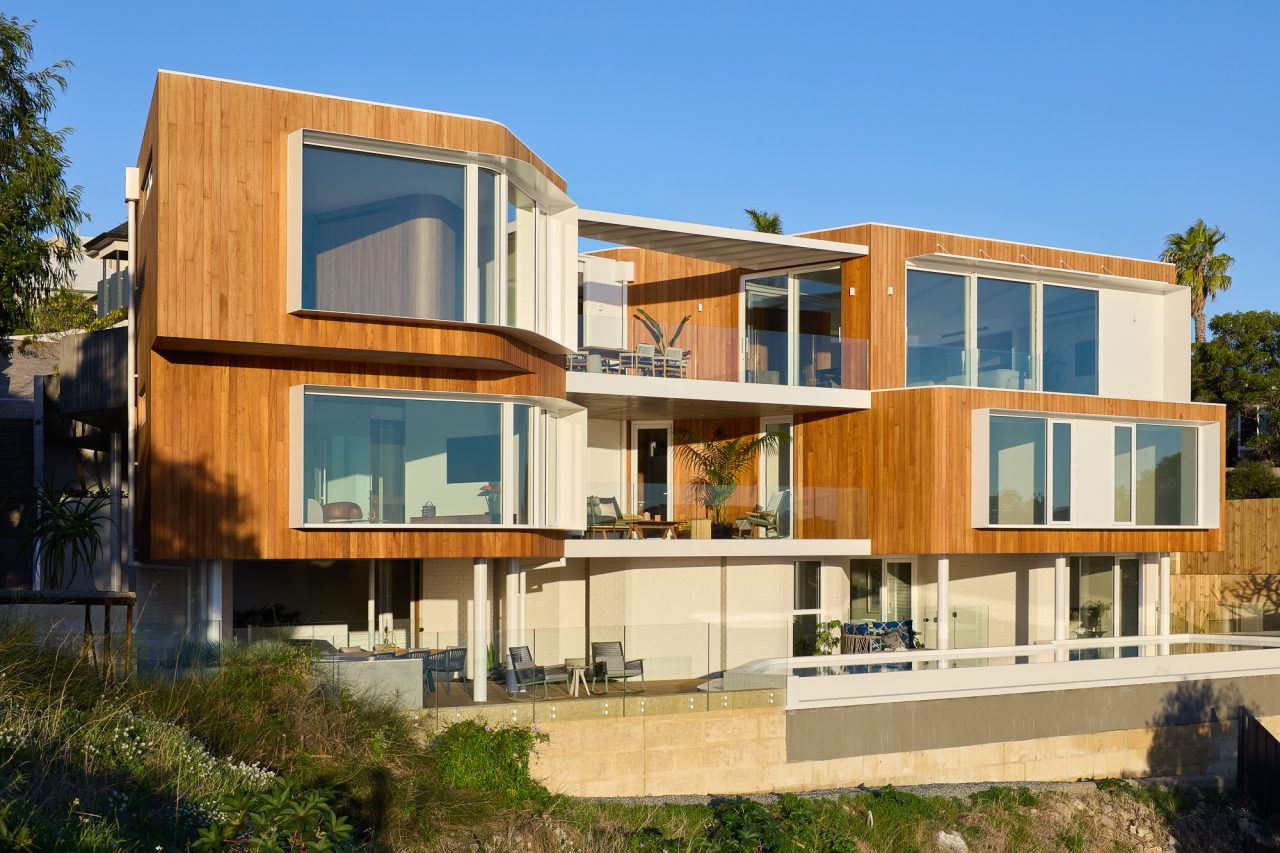 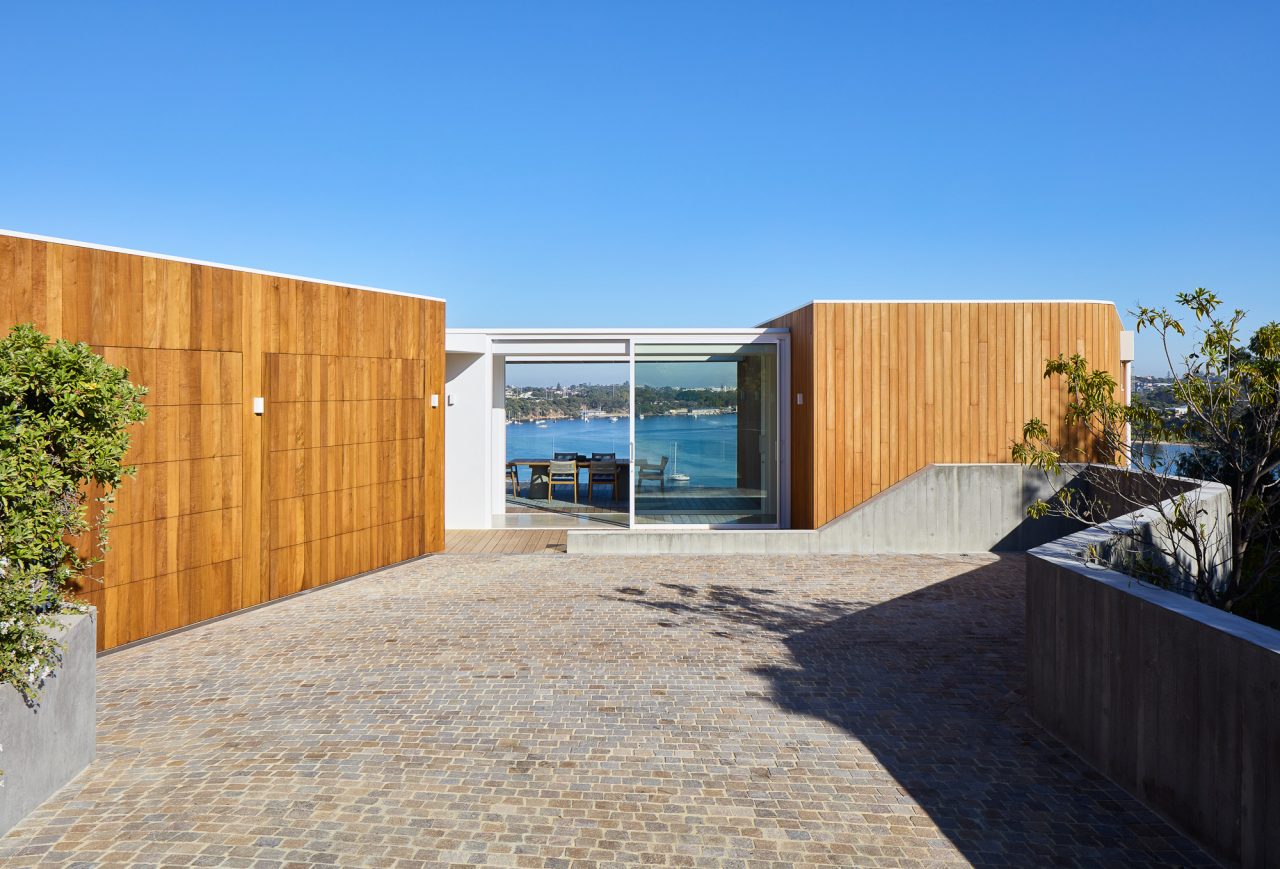 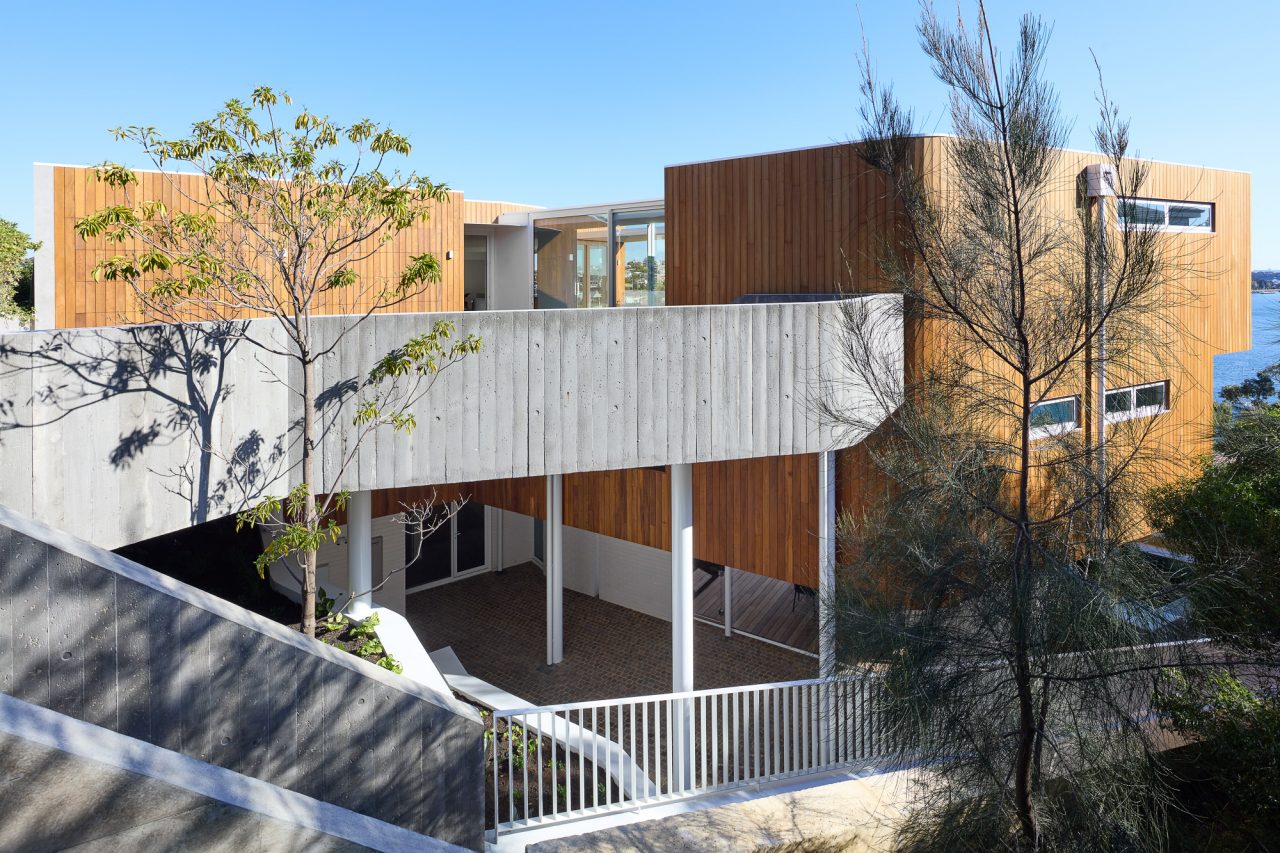 Differentiating itself from traditional mansion typologies, the residence compels the occupants to indulge in the landscape from the moment they step foot into the house. To this end, the form of the structure is separated into two clear volumes in plan, joined by transparent sun halls, providing a clear vision right through. The form of the two volumes has subtle curves, clad in a teak, to meld them into the adjoining landscape. The attention is directed not to grand entranceways, stairs, porticos, but instead to the views to the river beyond.

Internally the benefit of two volumes is clear – logistical and acoustic separation to maximise the functionality of the spaces (i.e. sleeping from cooking), as well as energy efficiency (lessen the total volume of conditioned space). But whilst separation has its benefits, the ability to utilise the doubled sided balconies between the volumes, is where the beauty of this configuration lies. 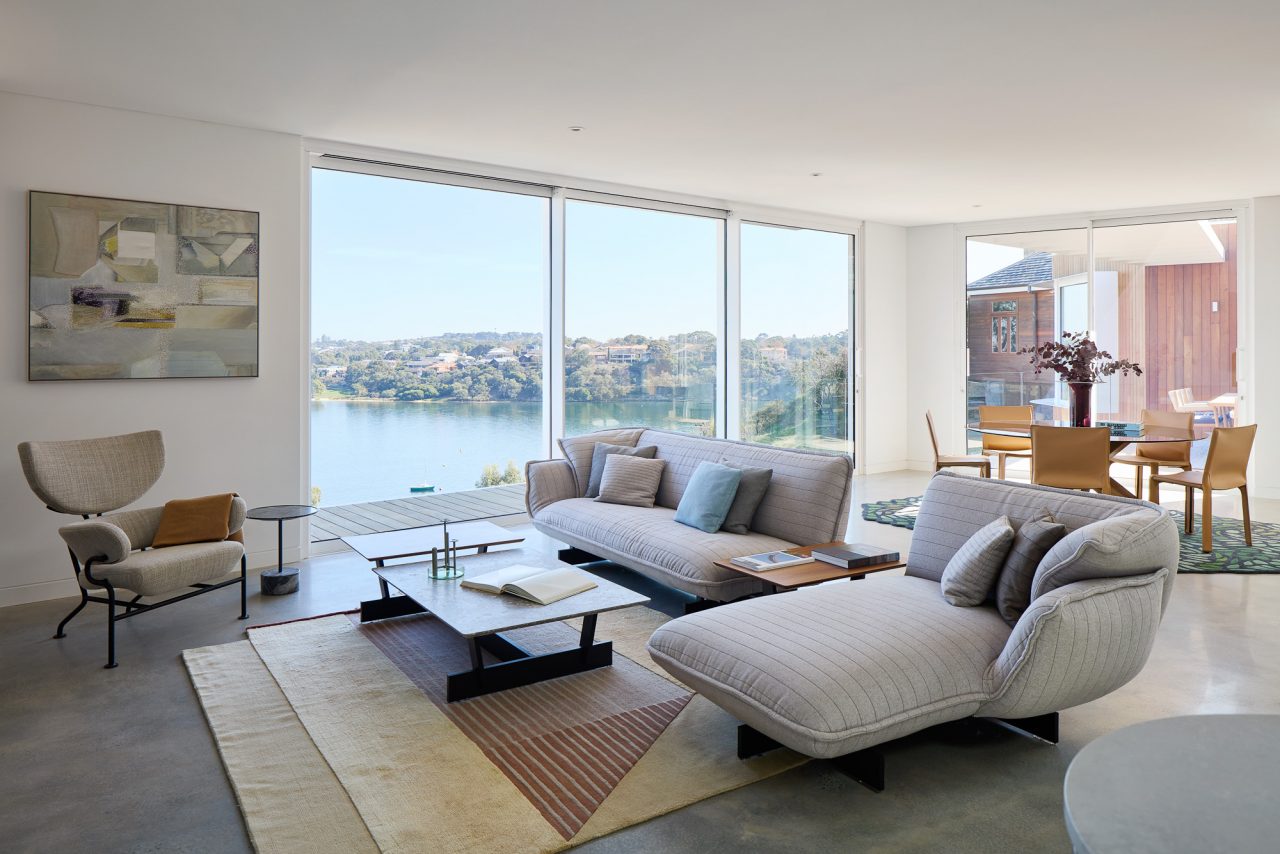 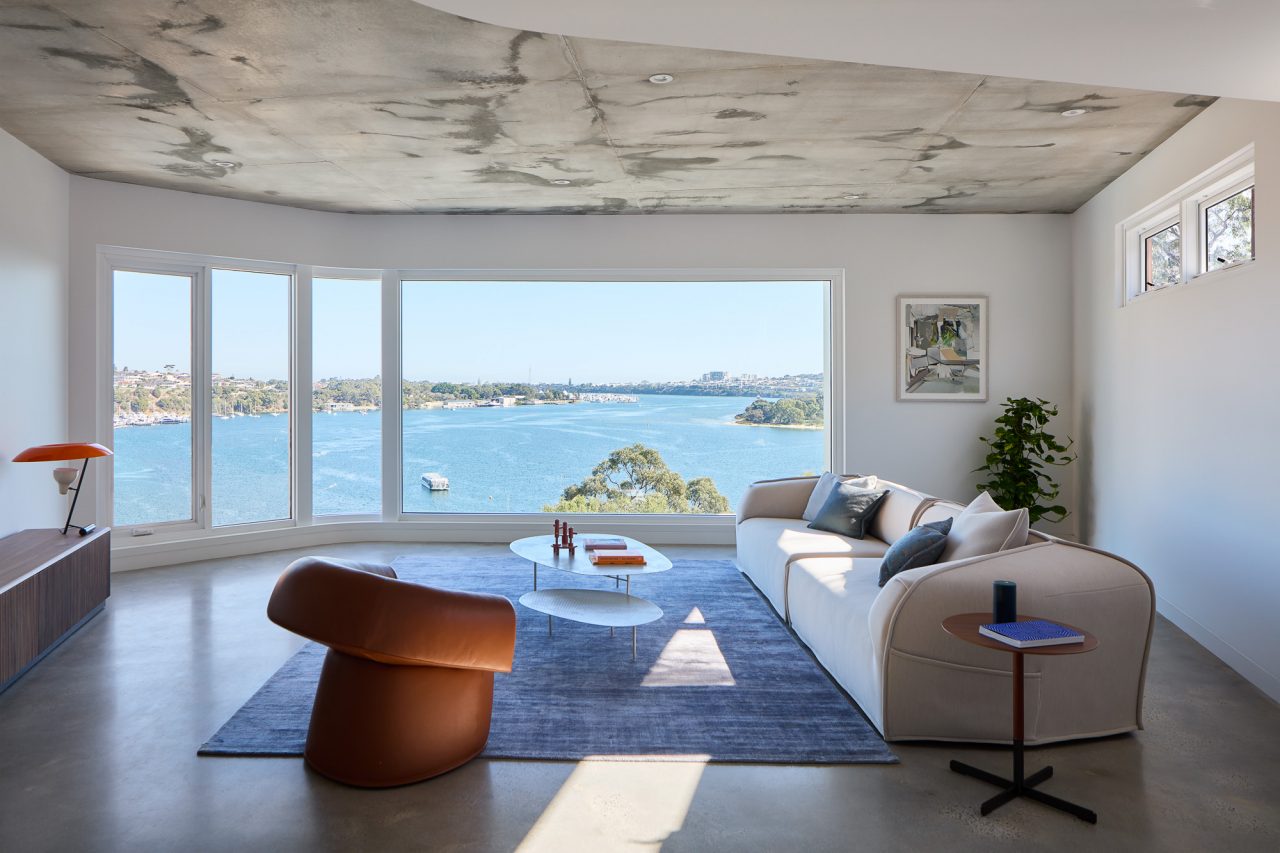 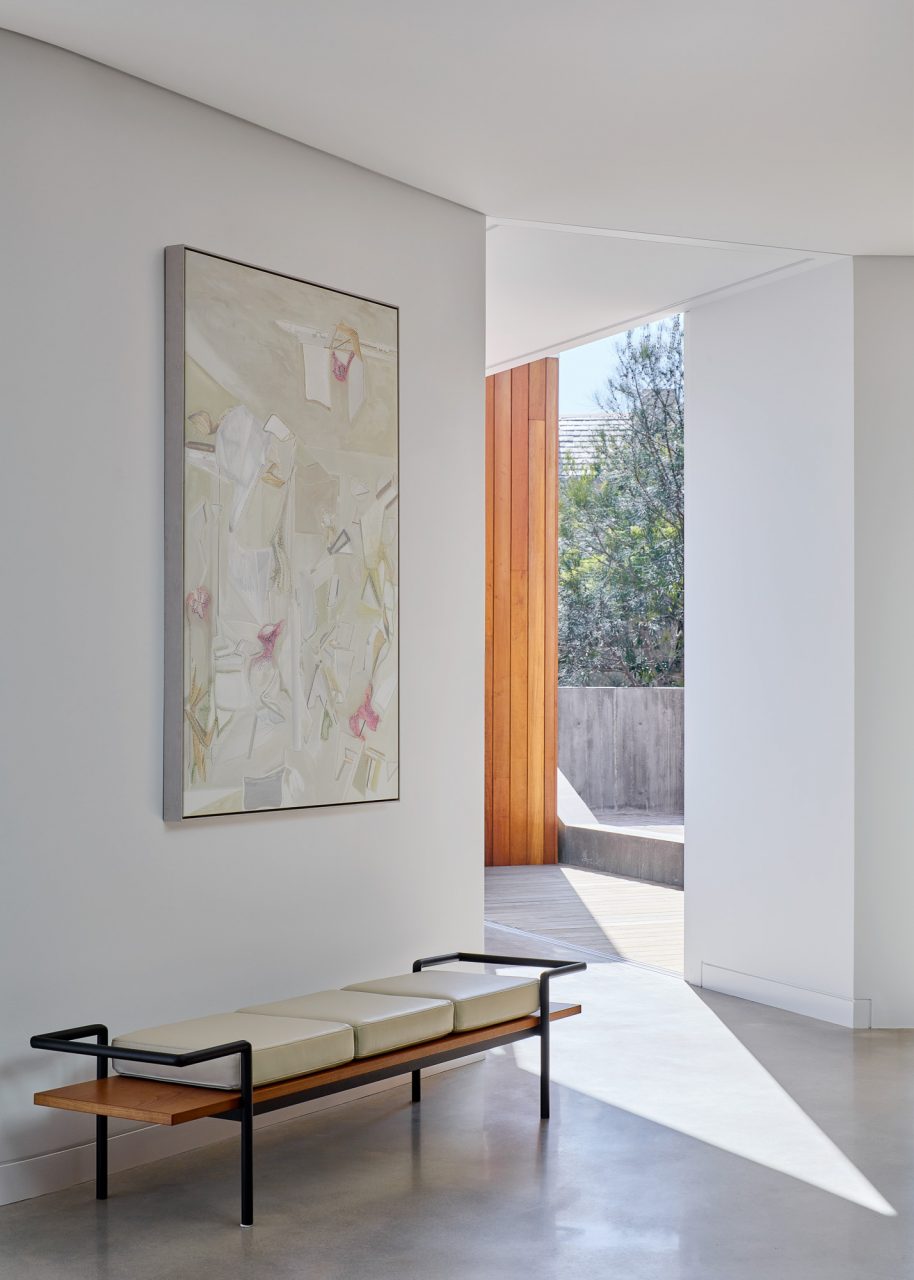 Opening up the massive sliding doors in the sun halls blurs the boundaries between driveway, entrance, sun hall and balcony, creating massive usable space where traditionally it would be permanently designated non-habitable or vehicular, and this follows a similar pattern on the floor beneath. What was once a balcony for 10 becomes an entertaining space for 100. 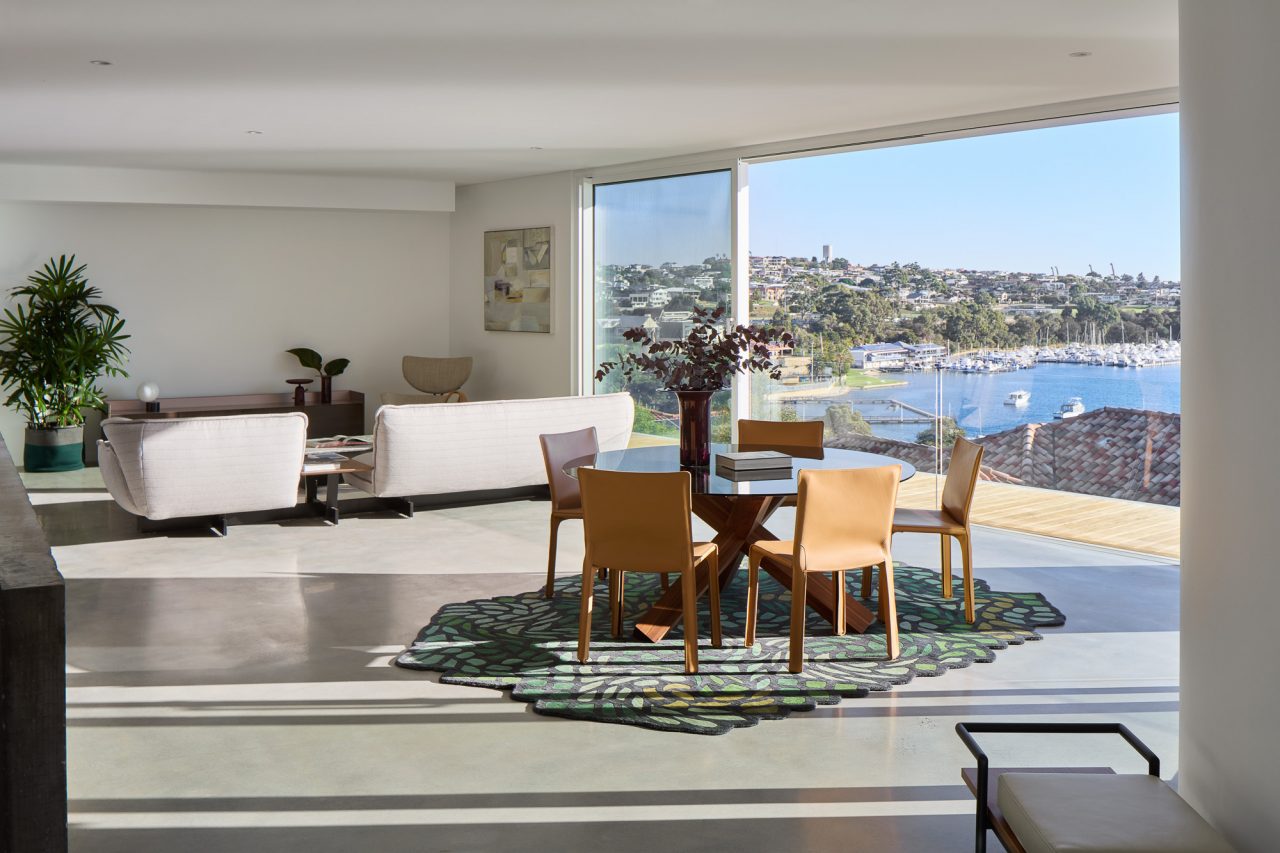 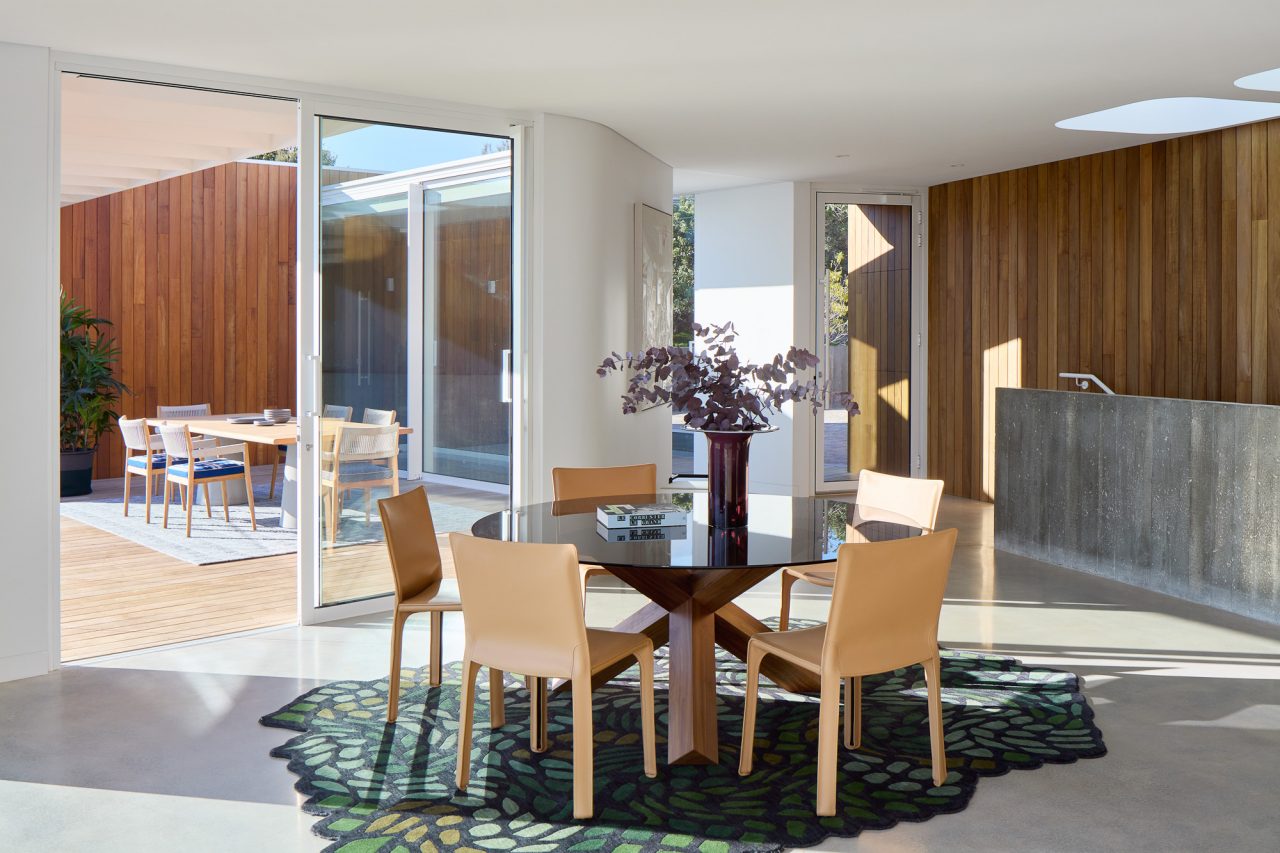 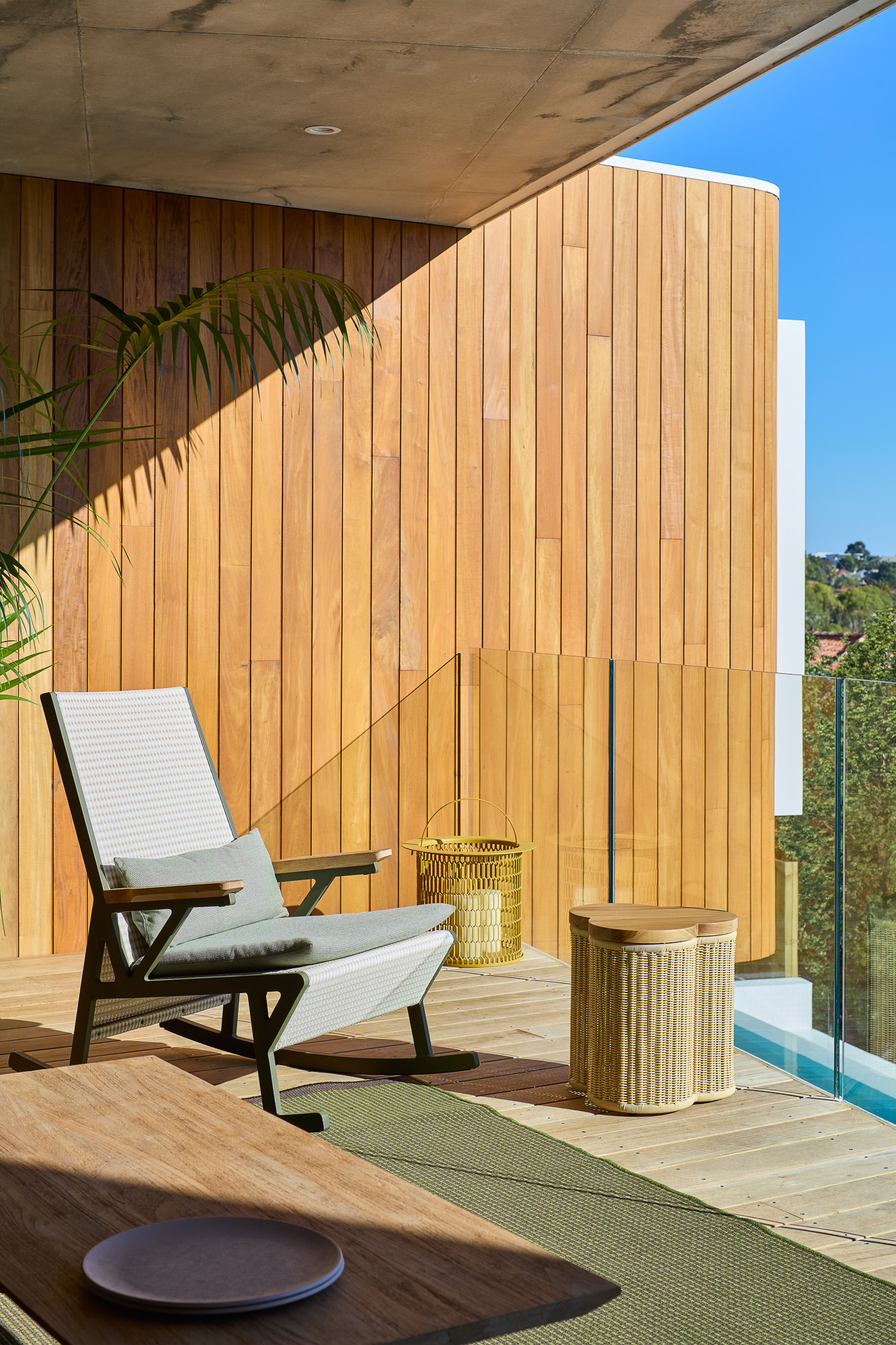 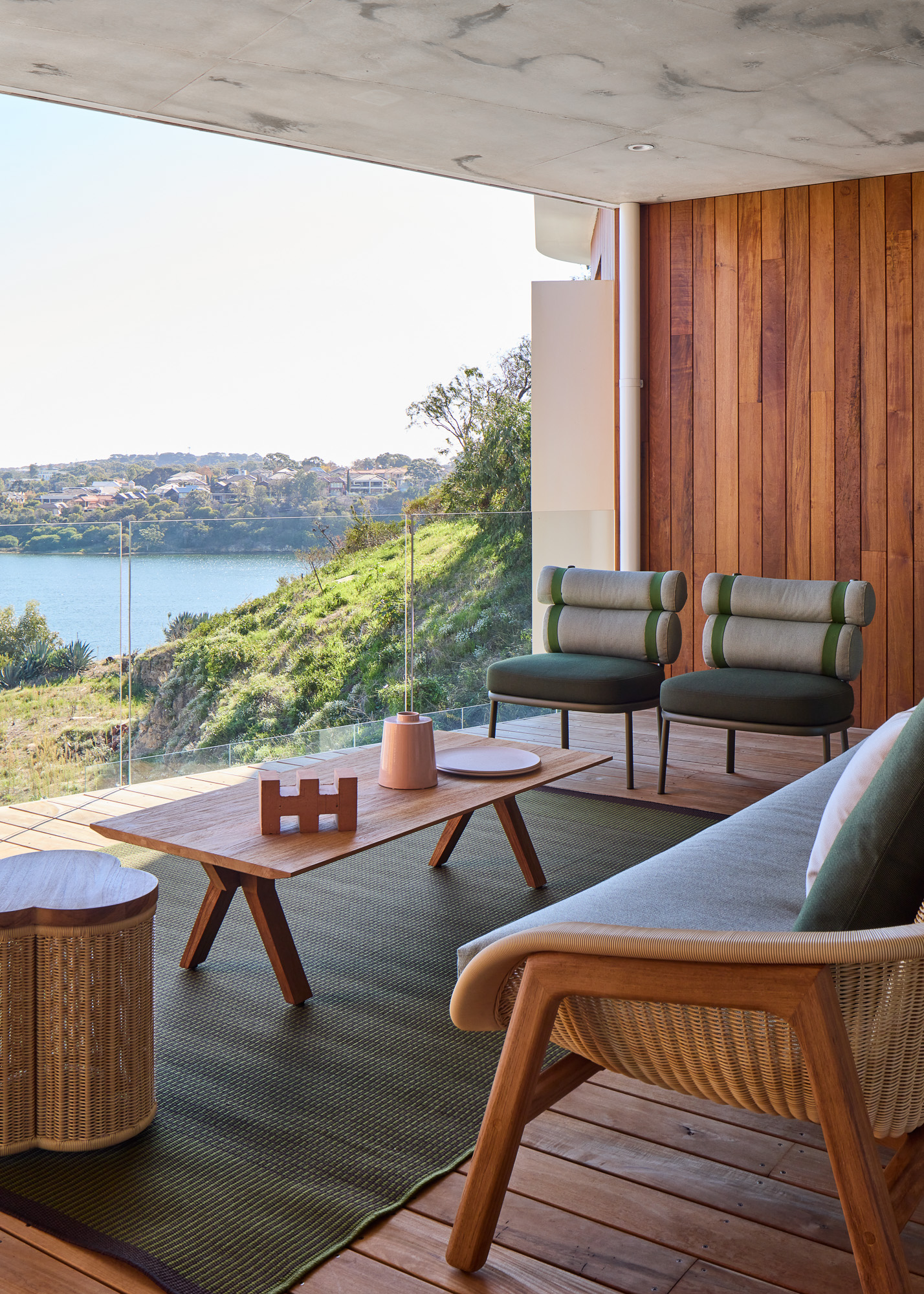 In section, the project shifts from dominant entertaining spaces up top, moving down to more private bedrooms spaces below, down again into guest suites and services areas.

Whilst this is spatially advantageous for certain rooms, as well as helping energy credentials by adding massive amounts of thermal mass, there was a consideration from the outset to ensure that the ground floor external spaces did not feel tight or pushed forward by the mass of the building. 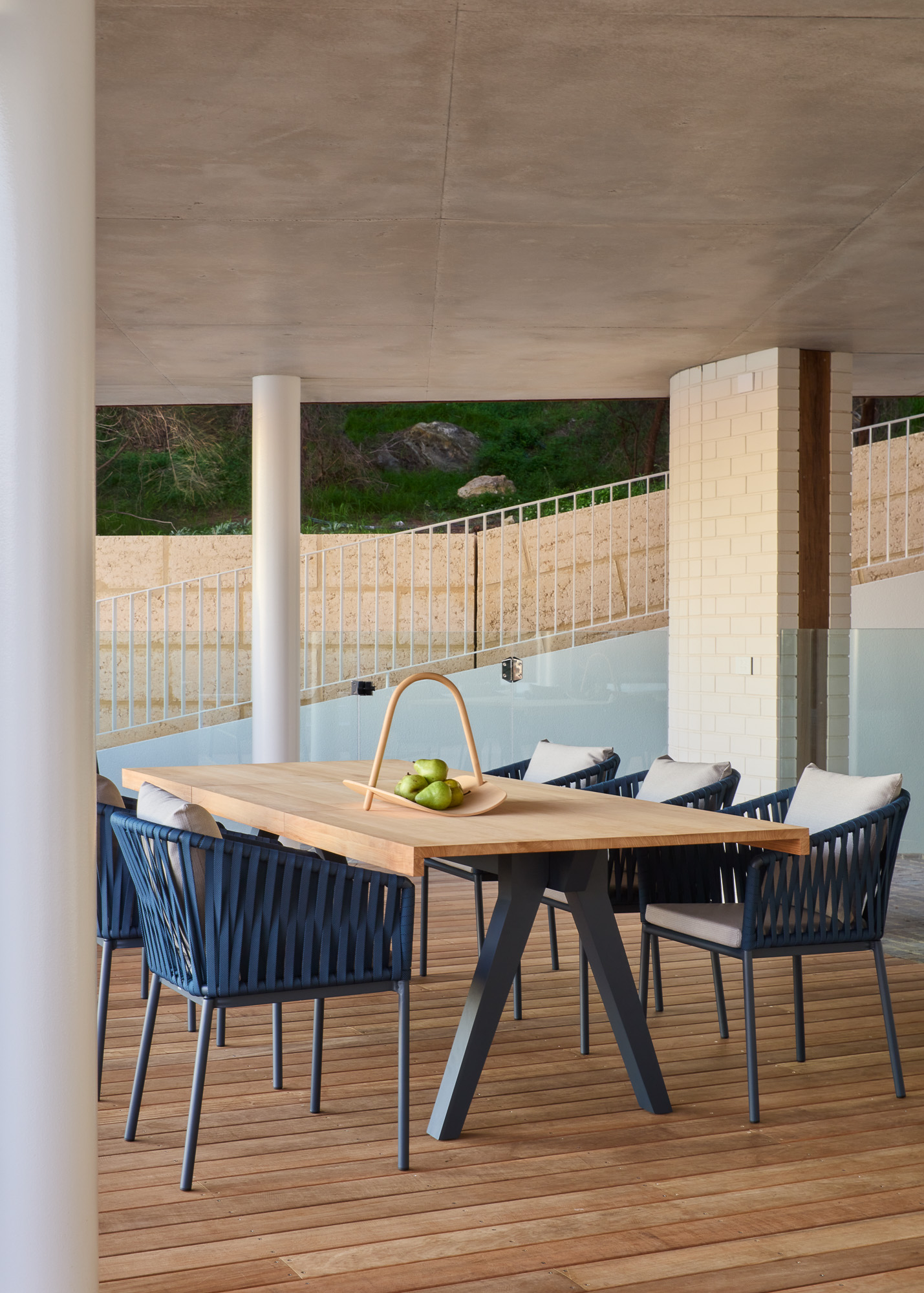 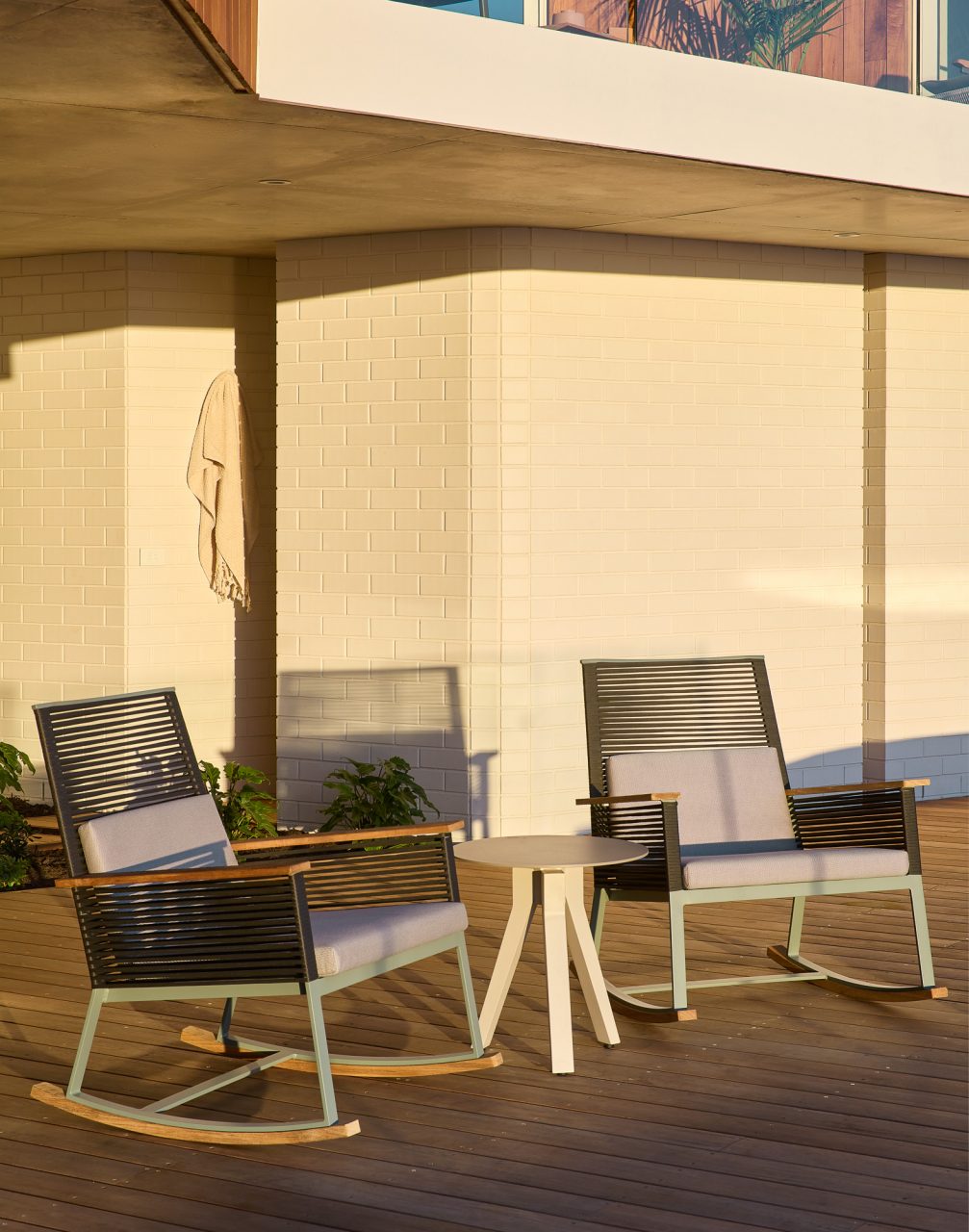 The solution took inspiration from Le Corbusier’s Piloti – raise the building on columns, letting the form of the residence itself create massive amounts of covered space. To avoid not creating a cave like experience, as you progress towards the line of the sheer limestone at the rear of the property, the height of the concrete soffit above jumps from single-storey to more than double the height, shaded by the suspended driveway over, light-filled and open in defiance of expectations.

Mobilia’s Salvatore Fazzari was drawn to the unconventional site and beauty of the home, which posed a unique challenge when it came to selecting furnishings. ‘The design of the home responds to its location with expansive windows, large open-plan living areas and alfresco spaces perfect for entertaining and enjoying the outdoors. With this in mind, we selected furnishings with soft, free flowing forms to juxtapose the architecture and create a homely feel without interrupting the outlook,’ said Salvatore.

Featuring natural materials including sustainably sourced teak timber cladding, raw concrete and Caesarstone quartz, the home’s palette is purposely neutral and ties into its surrounds. Mobilia’s furniture selections add accents of colour and warmth, drawing on the company’s extensive collection from some of the world’s leading design brands, including Kettal, Cassina, Poltrona Frau, Moroso, Astep, cc-tapis and Golran, among others. 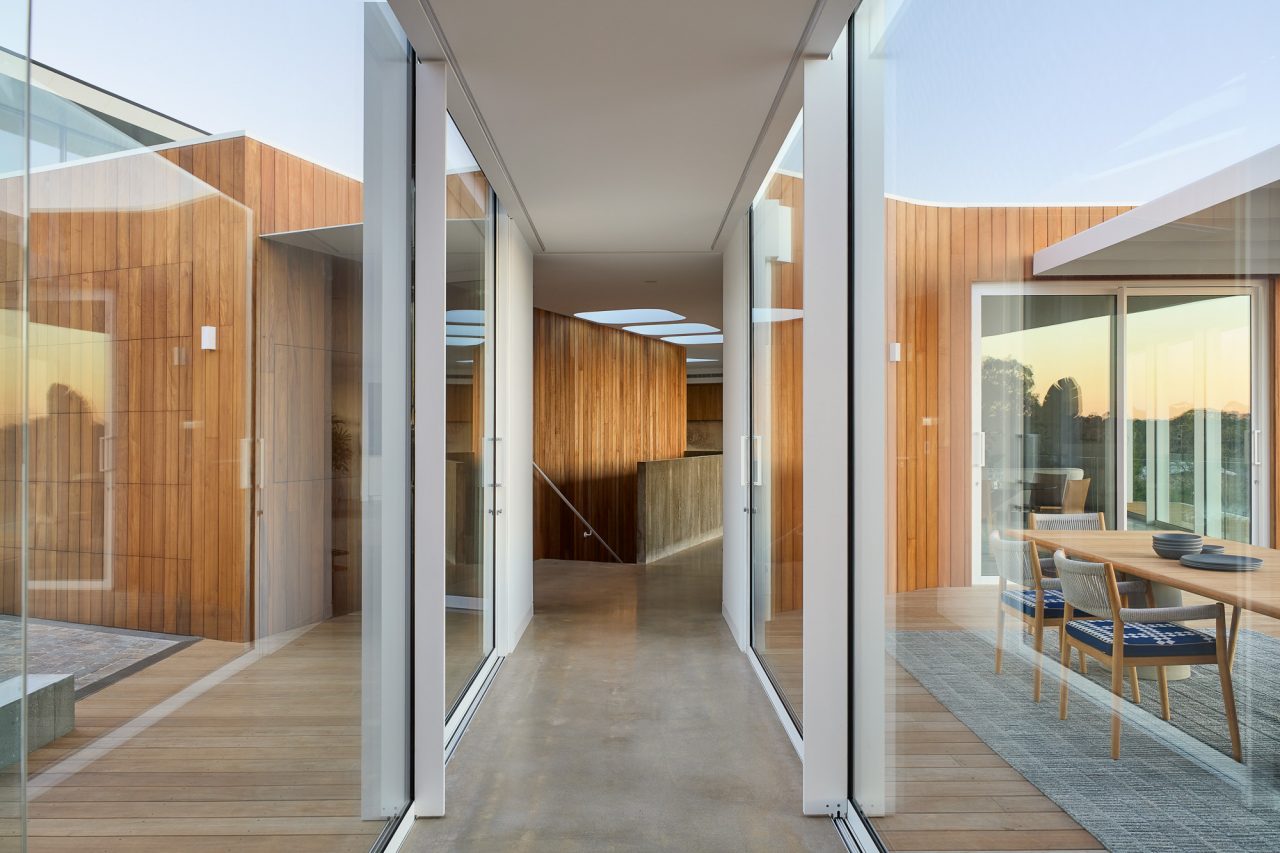 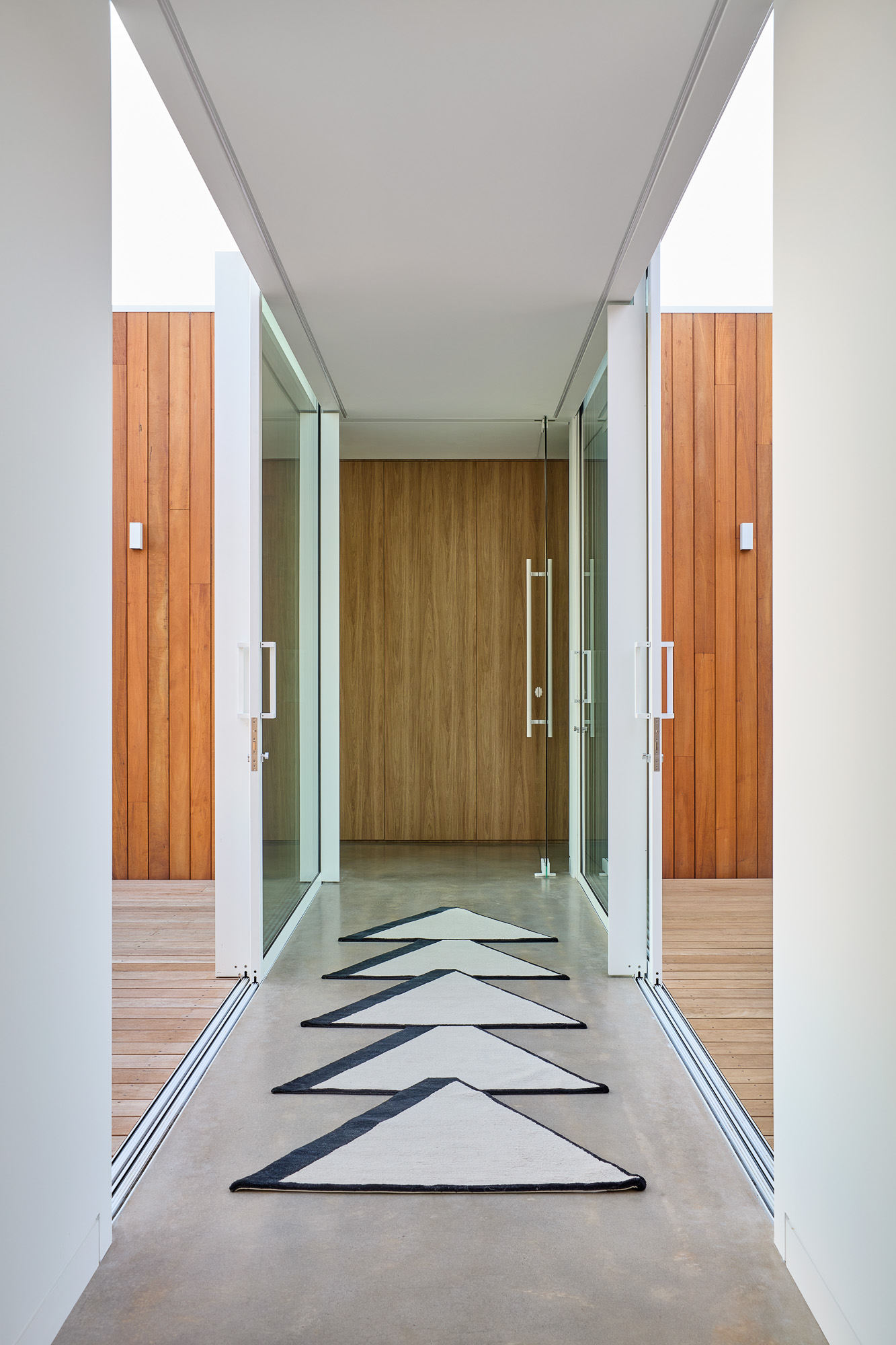 Entering on the upper level, the landscape is framed with two distinct spaces joined by a transparent hall. Raw concrete flooring in the open-plan living area is brought to life with the rich greens of Golran’s Garden of Eden March Free Shape Rug, set with the iconic Cassina Cab Chair in tan leather and the La Rotonda glass table.

The floor below follows a similar configuration with two volumes and a connecting transparent corridor, this time finished with the cc-tapis Ziggurat rug, adding a touch of playfulness. A lounge with expansive river views features Moroso’s sculptural Ruff armchair by Patricia Urquiola and Astep’s reissue of the Model 548 table lamp, designed in the 1950s by Gino Sarfatti. 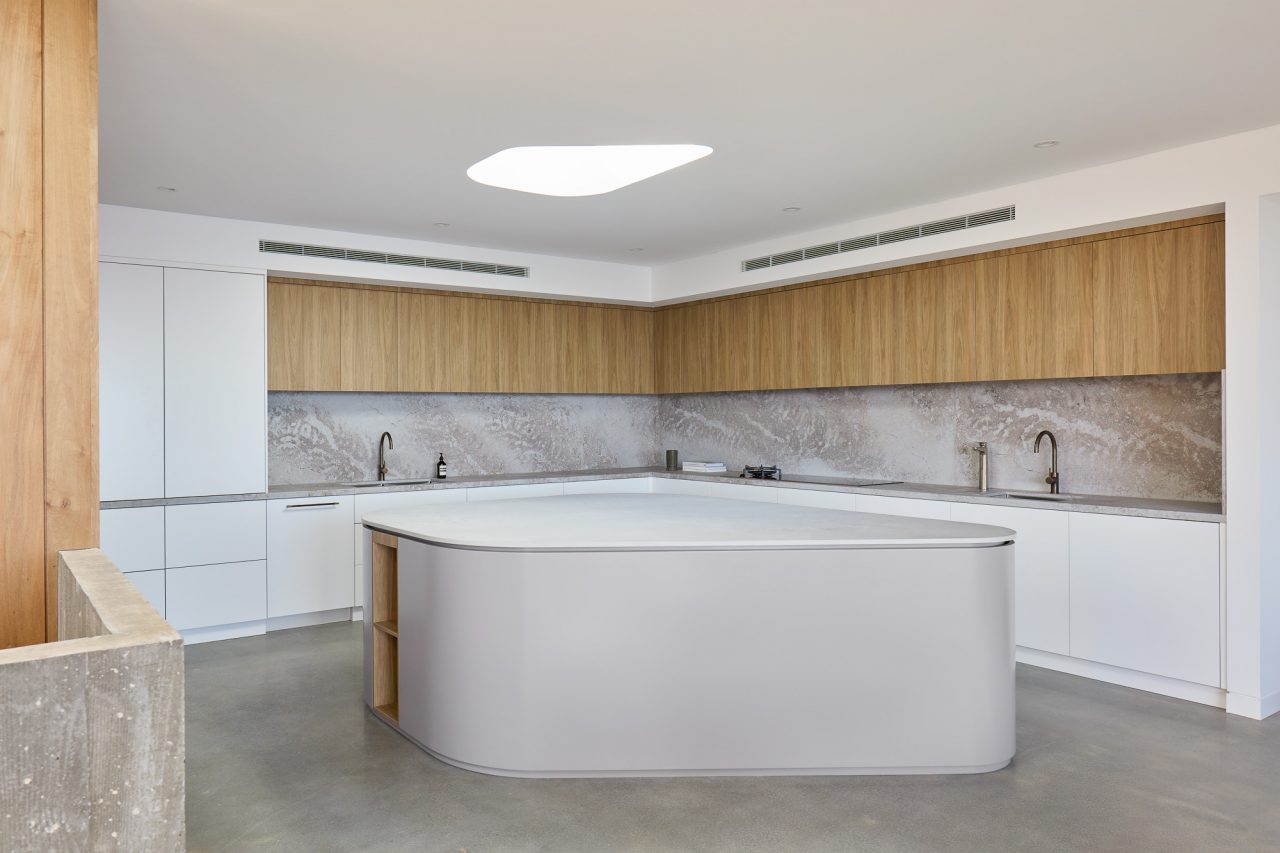 The massive kitchen island is shaped like an island and features imbedded LED perimeter lighting to the negative counter detail. The skylights over are subtly curved and feature concealed strip lighting throughout. For the enthusiast, there is an external viewing window for cars from the lower levels. The en suite to the guest suite is concealed behind a ‘secret’ panel. You can programme the lighting to do whatever you desire. The lap pool has a wet edge running its entire length with views to the ocean and beyond, with no pool balustrade separating. . .legally. Key external windows and the wall separating the master en suite are custom curved glass. All of these items are exciting; however, they benefit the architectural composition and experiential nature of the project and are not confined by the limits of being just ‘talking points’.

The alfresco area is furnished entirely with Kettal’s outdoor range and has been meticulously selected to reflect the environment around it. ‘We wanted the setting to become part of its surrounds, rather than compete with it,’ said Salvatore. ‘Various shades of green were selected including the Roll Club armchair and Vimini Settee by Patricia Urquiola and Block rug by Doshi Levien to reference the cliffside outlook.’

Infinity Views celebrates the best of West Australian life, maximising the outdoors and abundance of natural light. Its responsive design and master craftsmanship enhance the world class views and allows the home to gently sit into its landscape. 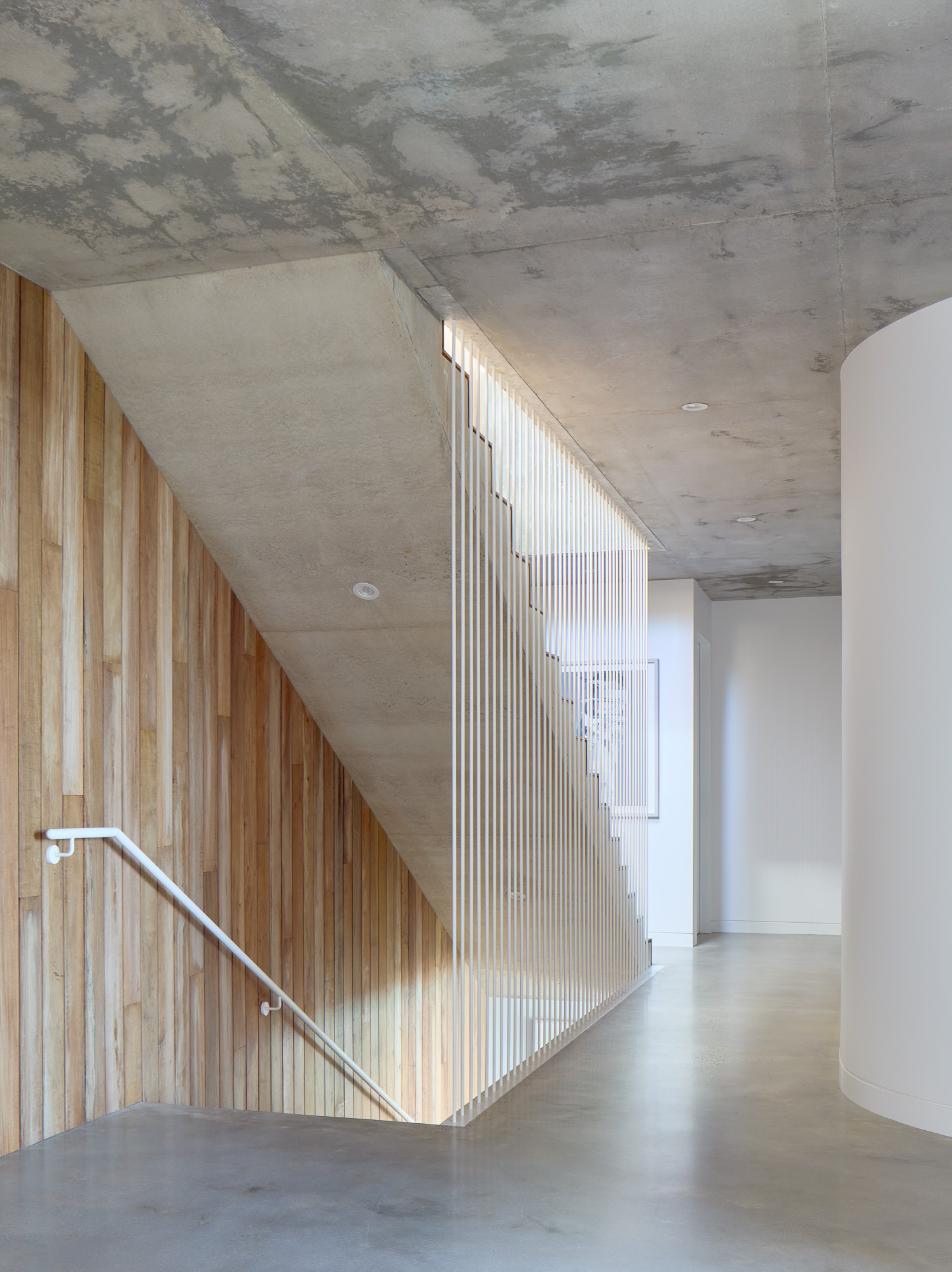 All materials work triple duty, they are aesthetic, they are structural, and they are energy efficient. Concrete is left raw, both of the floor and soffits (ceiling), grounding it aesthetically with the cliffs on which it rests. Walls throughout are oversized timber stud, to allow for R4 insulation throughout, plus a beneficial air gap, vapour barrier and the thermal mass of the solid timber cladding, sustainably sourced and vertically orientated to wrap corners where curves dictate. 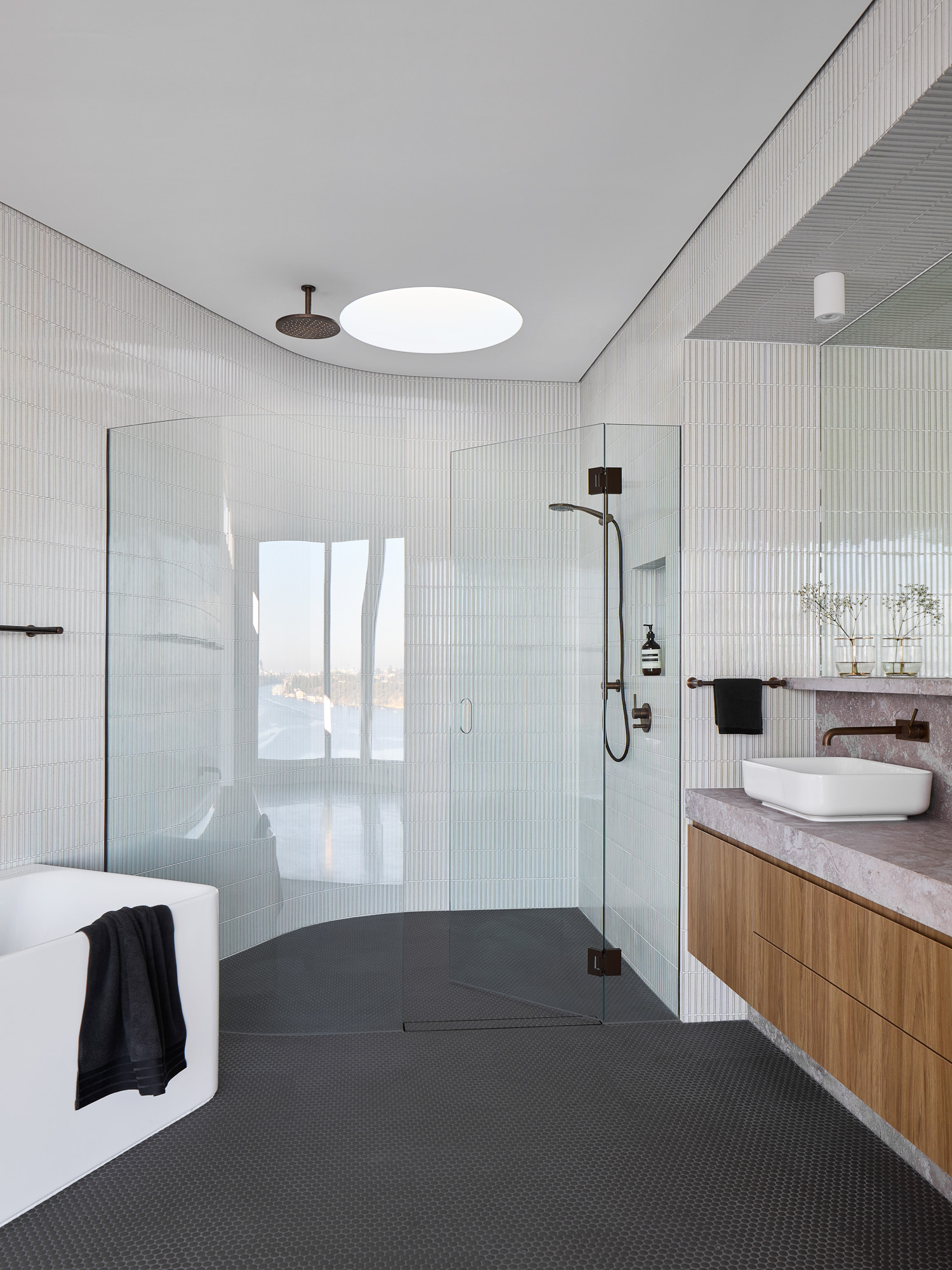 Balustrades around the driveway are exposed timber formed concrete, creating a tactile finish to complement the timber, whilst also acting as upturned beams to support structural loads.

Like a ship, this is a vessel which reacts in composition to its context, to create a form which from which its inhabitants look outwards. 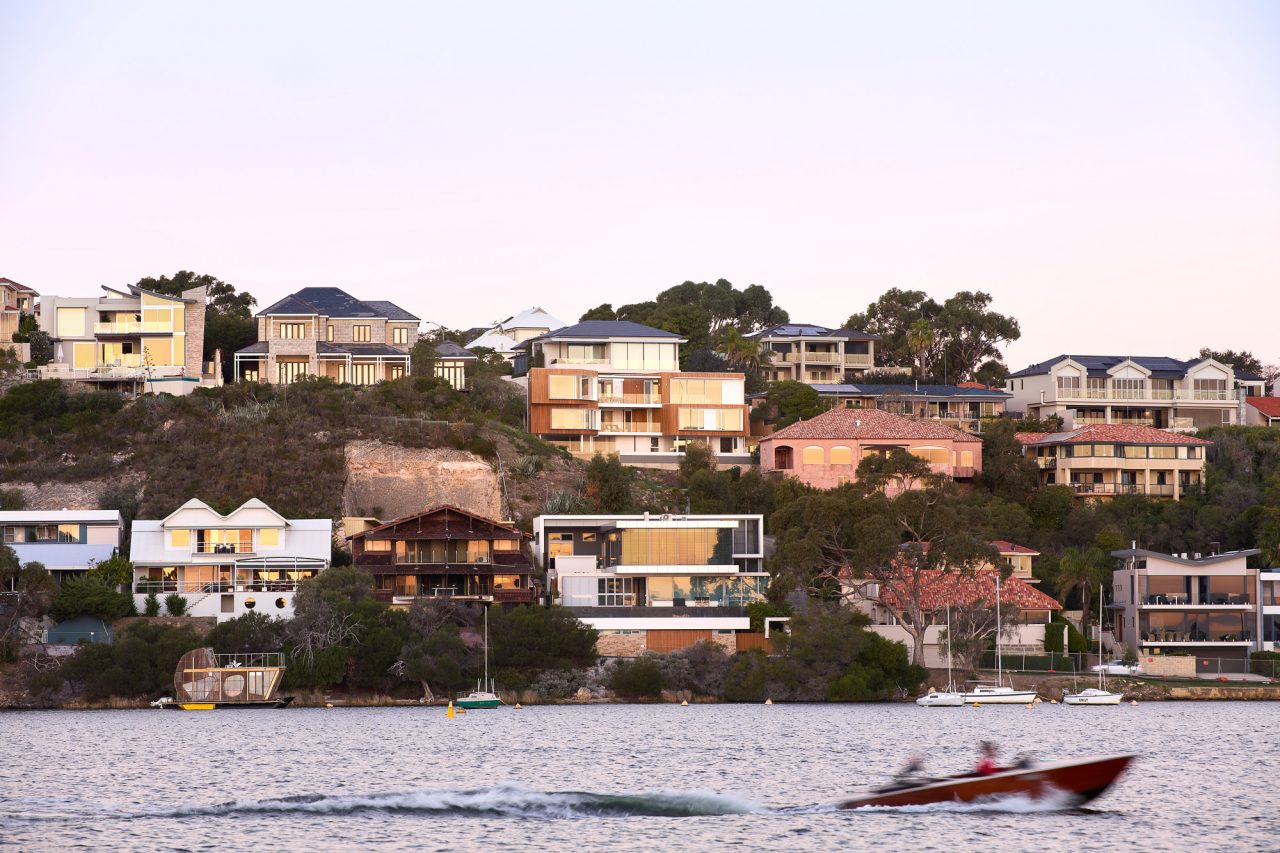