Cape Town-based artist Dave Robertson has been producing artwork and exhibiting since the mid-‘90s. Initially known for his photographic work, he has exhibited at several galleries in Germany, USA, the Netherlands and South Africa.

At the Spier Contemporary 2010 competition, Robertson won an award for Paper Trails, a photographic documentary project focusing on informal recyclers in Newtown, Johannesburg. Immediately following this achievement, he began to focus intensively on abstract painting and in 2011, had his first solo exhibition of abstract paintings at Worldart Gallery in Cape Town. Since then he has exhibited paintings at several galleries in the Western Cape and Johannesburg. 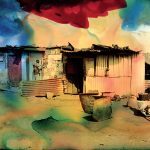 His photographic volume entitled, Plakkerskamp 2003-2012 documents a marginalised community in the Western Cape, over a nine-year period. This book won a prize at the Lëtzebuerger Buchpräis 2013, a national book award ceremony in Luxembourg. Dave Robertson was selected to exhibit work in a significant group show in 2014: Twenty years of Democracy, which was shown at the Appalachian State University, North Carolina, USA. 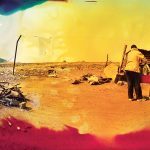 In 2015 a similar group show was presented as: Twenty: Art in the time of Democracy, which showed at the Pretoria Art Museum and the University of Johannesburg. In 2017 Robertson was shortlisted for the Riseart Art Prize 2018, an online gallery based in the U.K.

As a photographer, Dave Robertson is well known for his focus on people at the margins of society. In his Transition series, the artist combines his passion for photography with his passion for painting, fusing these two forms into a series of sensitive and captivating artworks. 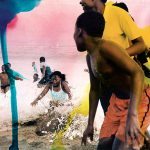 He presents us with a lens into the unseen world, a liminal, in-between space that is at once undeveloped and developed – a space that is ‘becoming’. His images are narratives of that which is not immediately apparent, but can be found just under the ‘skin’ of the perceived, physical world. This ‘skin’ translates literally as photographic emulsion and the lens is provided through the interaction of paint and photographic emulsion.

Robertson’s final images are photographs that have been transformed beyond the reality they originally portrayed, through a synthesis of gestural brushstrokes, expressive smears and the capturing of panoramic African scenes. As such, he has fused two worlds using the thin layers of two separate media; that of photographic emulsion and of paint. 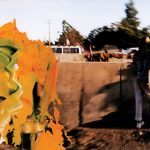